In recent years, the continuous development of science and technology has created many new products. The new technology of solar panel is more and more concerned by the public. The latest research shows that current solar panel system technologies can double the efficiency of electricity generation. Sounds like such amazing results have now been gradually applied to life, so let's take a look at this technology in detail.

What Is Solar Panel?

At present, more than 90% of solar panels on the market are made of silicon. The advantages of silicon photovoltaic modules are obvious. They are durable, cheap and easy to install. However, this kind of panel has obvious disadvantages. The efficiency of silicon photovoltaic panel is very low and the most affordable model varies from 7% to 16% under the influence of installation, orientation, weather and other factors.

The researchers realized that the efficiency of the battery depends on the film form. After several generations of research, the efficiency of silicon-based thin films has increased from 13.6% to 21.6%. By 2018, the Technology at Oxford Lab had reached 28%.

But that is nothing compared with this latest breakthrough. The National Renewable Energy Laboratory said in a statement announcing the findings that the key to the technology is how to stop the loss of energy in the form of heat." When sunlight hits a solar panel, the material absorbs photons and produces charge carriers - charges and holes," the document said. 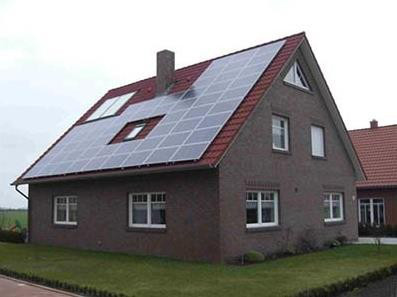 How Does Solar Panel Realize the Effect?

Hot solar panels quickly convert a charge carrier into electrical energy before it is lost in the form of heat. Stopping heat loss is a big challenge for off grid solar system, which is expected to be twice as efficient as conventional ones. The efficiency of conventional perovskite solar panels has risen from 3% in 2009 to more than 25% by 2020. A properly designed thermal load device could theoretically achieve conversion efficiency close to 66%."Researchers are not sure when the technology will be available to the market, nor can they estimate its cost. But the lab said the technology was close to commercial feasibility and could play a role in solid-state lighting, dynamic sensing, mechanical drive, advanced radiation detection, quantum information technology and photo catalysis in the near future.

Solar power relies on solar panels. Solar photovoltaic modules are the most popular in the market. Photovoltaic power generation is a technology that converts light energy directly into electrical energy by using the photovoltaic effect at semiconductor interface. The key component of this technology is the solar panel.

Compared to all other types of energy capacity additions, solar has the most proposed number of new units (2,732) as well as the most installed capacity (97,220 MW) in the pipeline between December 2019 and November 2022.Once the new technology is realized, solar panel generation in the future is definitely a major social development trend. Mono crystal solar panels and portable solar panels are more popular products on the market today, and they are the main R & D products of our company.